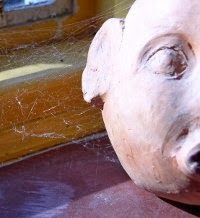 As a visual amateur astronomer, I return time and again to considering the structure and spectral response of the human eye. It soon becomes clear that anyone postulating that it was created by some sort of divine entity must conclude that the divine entity is either spectacularly ignorant about the nature of light and its interaction with matter, or is just a bloody-minded sod that has chosen to endow its pinnacle of creation with substandard eyes. With a bit of thought, it could have done so much better — it's not as if it didn't know how!


As you can see, the main light receptors (rods & cones) are not situated on the front surface, but behind (in the simple model, above) three other (non-transparent) layers of tissue: The light has to pass through four layers before it is received by the photoreceptors. (If you want a more complex model, it's 9 layers, but that doesn't really make any difference to the argument).

Another consequence of this arrangement is that the nerve fibres are in front of the receptors. This means that they have to pass through the receptor layer, thus creating the Blind Spot. Hmmm -- clever? Nah, not really. Stinks of evolution!

Now let's consider the response of the different cones to different wavelengths (colours) of light. Human vision has a range of approx 420nm to 680nm. We are trichromats, which means we have 3 types of colour receptor (called "cones"), with peak responses at approximately  430nm, 545nm and 572nm. Why would an intelligent designer create the clumping around 550nm? The usual excuse is that this is where the Sun's peak output is. This is simply incorrect: it is 504nm. Anyway, even if it was correct, we would not need 2/3 of our colour vision receptors to be closely packed around that wavelength. 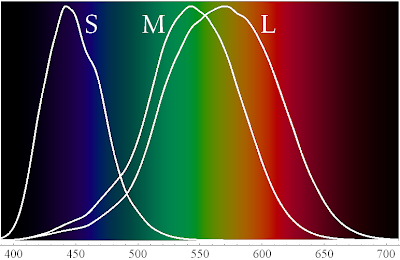 So, how could it have done better? The answer is: "Really Easily!" It had lots of practice. After all, in its wisdom, before it created us, this divine entity supposedly also created the birds, the fishes and the insects, many of which are tetrachromats (four kinds of cone) and some are even pentachromats (five kinds). The finch, for example, has its peak colour responses more evenly spaced: 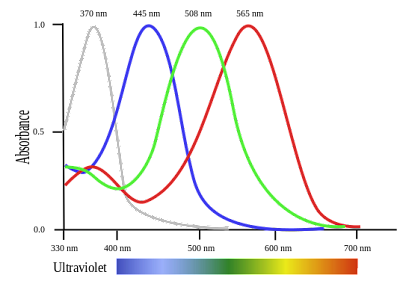 
So, why did this divine entity give us such relatively poor vision, when it could so easily have done better?

Or did our vision just evolve, with inherited characteristics from folivorous and frugivorous mammalian ancestors, for whom an ability to finely discriminate colours in the yellow-green would have conferred an evolutionary advantage?
Posted by Tetenterre at 01:27